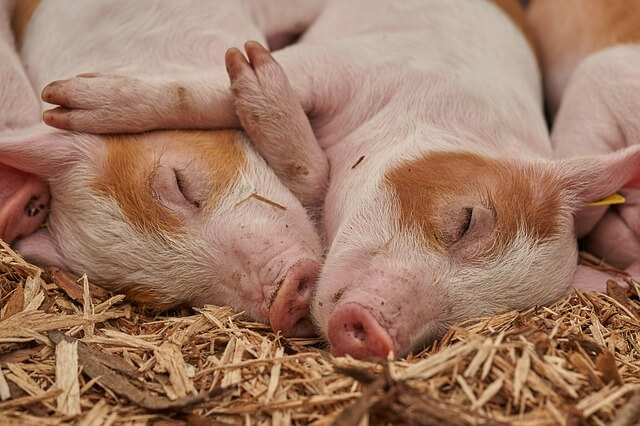 Mycotoxicosis can negatively impact all stages of animal production. Exposure to mycotoxins can occur as either a large single dose (acute) or as a lesser quantity consumed over time (chronic). To make matters more complicated, multiple mycotoxins can have greater negative effects, with synergistic roles on performance and health (Swamy, 2012). Symptoms of mycotoxicosis are then dependent on the type of mycotoxins involved, the concentration and the age or health status of the animal.

Consumption of mycotoxins, at both lower and higher concentrations, can significantly impact gastrointestinal health. Damage throughout the small intestine can lead to decreased villus height or increased crypt depth, nutrient malabsorption, intestinal lesions and even hemorrhaging (Maresca, 2013; Alizadeh et al., 2015). Several mycotoxins are also shown to increase the colonization of pathogens such as  Salmonella and E. coli.

Despite having a rumen, ruminant animals are not resistant to mycotoxin effects. Although rumen microorganisms can degrade some mycotoxins, other mycotoxins can have detrimental effects on these organisms or can pass through without breakdown (Fink-Gremmels, 2008). As a result, even low doses of mycotoxins could play a role in rumen and gut health.

Mycotoxins can impact the immune system, with the ability to cause both immune stimulation and immune suppression depending on mycotoxin type and concentration. Immune stimulation often results in the production of

proinflammatory cytokines (Maresca, 2013), which is an energetically costly process for the animal and may adversely impact performance. Immune suppression is also of concern because it can lead to increased susceptibility to secondary diseases, reoccurrence of chronic infections and even the failure of vaccine programs (Oswald  et al., 2003; Taranu et al., 2003; Meissonnier et al., 2009). Poor vaccination efficiency can be of considerable importance in animal production when vaccination is essential for disease prevention and control.

Whether it is simply a case of reduced feed intake or a combination of the various effects throughout the body, mycotoxins can have an impact on growth and performance output. Research has shown that growth performance can be reduced at both lower and higher levels of mycotoxin consumption (Alizadeh et al., 2015; Chaytor et al., 2011). In dairy cows, reduced milk production and quality could be a sign of mycotoxin consumption.

Mycotoxins can also impact breeding performance. In some cases, the effects on reproductive performance may be caused directly by mycotoxins, such as in the case of zearalenone consumption. However, reproductive changes may also be due to the indirect effects that other mycotoxins have on animal health. Trichothecene mycotoxins, such as deoxynivalenol and T2/HT2 toxins, are shown to lower egg production and hatchability rates of poultry, increase the number of stillbirths in pigs and lower pregnancy rates in dairy cows (Chowdhury and Smith, 2004; Diaz-Llano  and Smith, 2006; Yegani et al., 2006; Hulik and Zeman, 2014).

In many cases, the problems associated with mycotoxin-contaminated feed are not a result of acute contamination, but rather due to long-term consumption of low levels of mixtures of mycotoxins. Animals can develop an array of metabolic disturbances that result in poor performance, low productivity, changes in carcass quality, reduced fertility and immune suppression. Mycotoxins should thus always be of concern to animal producers, as these contaminants can significantly impact animal production and profitability.

To minimize the threat of mycotoxins, feed and animal producers can utilize a range of techniques, from testing feedstuffs/feeds for mycotoxins (a recent article on the  various methods for testing for mycotoxins can be found here) to including a broad- spectrum adsorbent in the feed, such as Alltech’s Mycosorb A+.

More information on mycotoxins is always available online at knowmycotoxins.com.