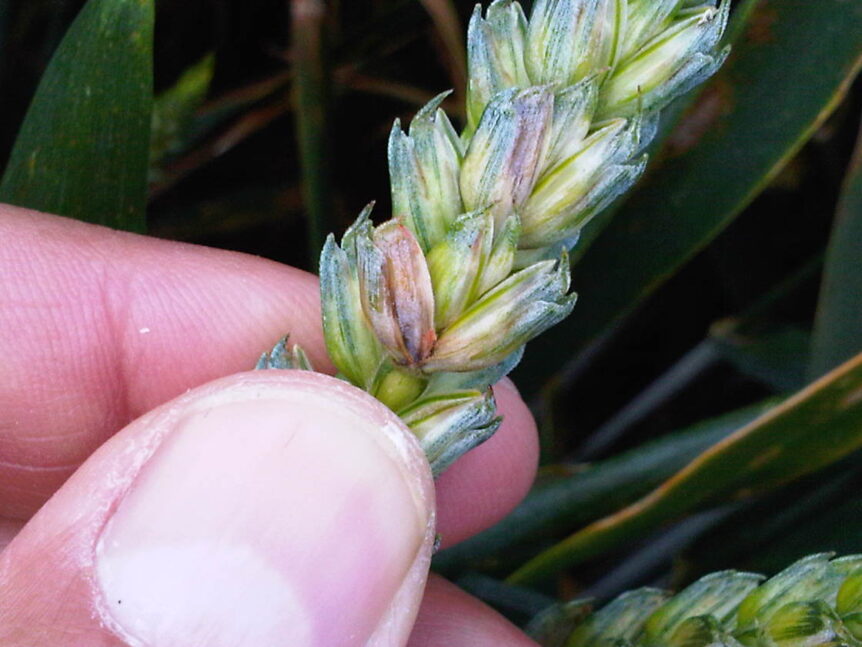 Mycotoxin related health issues in beef cattle can cause illness in the animals and impact the immune system, performance and consequently reduce growth rates and increase production costs. Mycotoxins are secondary metabolites secreted by moulds, mostly belonging to the three genera; Aspergillus, Penicillium and Fusarium, produced in cereal grains as well as forages before, during and after harvest. Forages and cereals naturally come into contact with fungal spores. Mycotoxins can occur in feedstuffs used in beef cattle rations such as grains, silages, hay and by-products. Moulds exist in many feed ingredients and forages, particularly if the moisture content is above 14%, temperatures are greater than 16˚C and aerobic conditions are right. If losses related to mycotoxins in animal feeds are scaled, the range of economic losses can be significant.

Mycotoxins are substances naturally produced by fungi and usually form as part of a microorganism’s defence. Most natural feedstuffs are susceptible to contamination. The fungi growth is typically stimulated by environmental factors, such as high temperature and humidity, both pre and post-harvest. However, toxin production is dependent on factors such as microbial competition, nutrient availability and substrate structure, water activity, pH, temperature, relative humidity, presence of bugs, and application of fungicides and pesticides. Late harvest may aggravate mycotoxin production in the crop, because the longer the grain stays in the field, the more susceptible to stress factors it becomes. In addition, the lack of proper storage of grains or poor forage and silage preparation may also allow fungal growth and mycotoxins.  Mycotoxins can be present throughout processed feeds. In this respect, distillers’ dry grains with soluble (DDGS) represent an important potential source of mycotoxins since mycotoxins are able to survive the ethanol production process and are concentrated three-fold in the residual matrix.

Mycotoxins can induce health issues that are specific to each toxin, have synergistic toxic properties in the frequent case of multi-contamination, and/or affect the immune status of animals promoting infections and have a negative impact on livestock production.

Mycotoxin risk remains unavoidable and the lack of practical solutions to totally avoid mycotoxin contamination of feed explains why inorganic materials such as clays, bentonites and aluminosilicates, known for their adsorptive properties, were first proposed to reduce the toxic effect of aflatoxins.  However, these inorganic materials showed only limited efficacy against other mycotoxins. Furthermore, they reduced the biological value of certain nutrients and could contain dioxins and heavy metals. Organic materials such as yeast cell walls have been proposed as an alternative solution to complex mycotoxins within the gastrointestinal tract without impairing nutrient bioavailability or inducing detrimental environmental effects. It is important to understand the chemistry of the sequestration process involved in toxin clearance.

What effect do mycotoxins have on your herd?

Cattle fed highly contaminated feeds can suffer from digestive disorders, lower feed intake, immune challenges and increased susceptibility to disease. Consequently, a reduction in overall performance will result, therefore producers should take steps to minimise mould and mycotoxin growth over the coming months. Approximately 50% of silage and TMR samples contain Penicillium or storage mycotoxins.  These mycotoxins can continue to grow during storage, increasing the risk to the animal at the feedlot.

How can Alltech Mycotoxin Man help?

The ALLTECH 37+™ feed analysis test is the most advanced mycotoxin analysis available and considers the mycotoxin challenge present in each sample as a whole rather than looking at the individual mycotoxins present. The risk assessment reports below summarise the survey and show which mycotoxins pose the biggest threat and the overall mycotoxin risk to beef cattle. Silage (corn and grass) samples contain an average of six mycotoxins per sample.

Mycosorb® A+ from Alltech is used to manage mycotoxin risk and reduce instances of future contamination. As Australia’s leading mycotoxin binder, Mycosorb® A+ offers producers a solution to help minimise the possible risk of undetected mycotoxin related health issues on your herd’s productivity.

The inclusion rate for Mycosorb® A+ for a low to medium mycotoxin challenge in beef cattle is 10 grams per head per day. This equates to a cost of 13 cents per head per day (current July, 2020).